Duane Jethro is a junior research fellow at the Centre for Curating the Archive, based in the Michaelis School... ->

COVID-19 and Art in South Africa

The Voids of Thuli Lubisi’s Apart 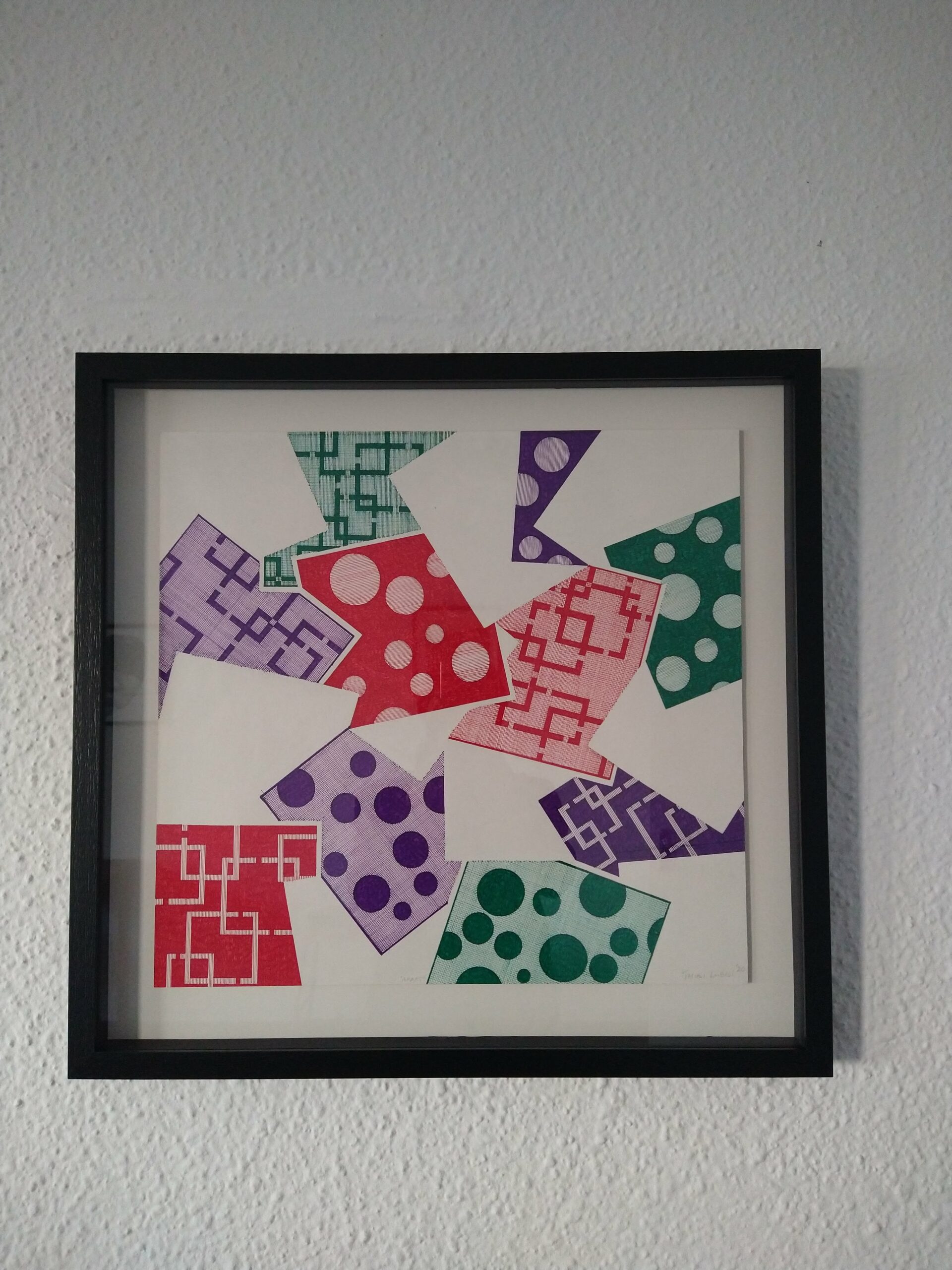 The gaps between the vibrant red, green and purple geometric shapes that make up Thuli Lubisi’s abstract drawing Apart are heartbreakingly narrow. The shapes are cut at jagged, sharp angles that sit sometimes achingly close to one another in a free-floating space of white like an abandoned child’s puzzle, or flakes of wedding confetti strewn on the surface of a secluded pond. At certain points they meet ever so slightly, edges touching, faint lines barely threading one shape to another. Yet the whole remains a mass of floating colourful shapes that threaten to forever drift apart.

There is a poetry to the piece that captures the mood of the pandemic and which speaks to the maturity and depth of the artist’s craft. Thuli Lubisi is a visual artist and printmaker, born in 1993 in Atteridgeville, Pretoria. She studied Visual Art at the Funda Art Centre in Diepkloof, Soweto, during 2015 and then went on to participate in the printmaking programme at the Artist Proof Studio, also in Johannesburg.

This work was included as part of an online campaign to draw attention to the effects of the pandemic on artists, especially young black artists. The proceeds of the campaign would be used to benefit artists who had been affected by the pandemic. Young black South African artists like Lubisi have been badly affected. Intermittent lockdowns starting in March 2021 have prevented them from working, exhibiting and potentially making sales. But it is the live arts such as theatre and music that have been hit the hardest.

To be clear, the arts had been chronically underfunded by the South African state long before 2020. The COVID-19 pandemic only landed a further economic blow. To make matters worse, artist funds allocated by the Department of Arts and Culture were either mismanaged or embezzled. Frustrated and enraged, a group of artists protested in early 2021 by occupying the offices of the National Arts Council, decrying the lack of transparency about the allocation of relief funds and demanding a thorough investigation of the culprits.

Benefit auctions such as the one in which Apart appeared are well-intentioned and well-meaning, making a short-term difference in what is really a long-term structural problem. The South African art market is still predominantly controlled by white-owned galleries patronised by wealthy white collectors. Young black artists remain at the tail-end of the value chain. Economic inequalities that existed before the pandemic have only deepened. This replicates a global trend where relations of art production, sale and collecting are largely inversely racialised, especially in recent times when there has been a boom in sales of work broadly and somewhat problematically classified as ‘African art’.

But Lubisi’s piece is provocative for me also for the poignant, uneven ways it captures both the whimsy and heartache of the pandemic. It is especially striking in how it unassumingly reflects the way the pandemic has infected and disrupted our personal relationships. As Lubisi put it, “[The work] represents the new norm which has been created by this pandemic. The lives that we were accustomed to have been interrupted; because we’re separated from each other and there is now a void.”

The virus has caused us to be suspicious of strangers, of co-workers and our intimate partners. It thrives in spaces of trust, closeness and care, the very spaces we need in uncertain times like these. Patterned the way they are, the shapes reference the fracturing of our most important relationships. It cites the agony that sits in the spaces in between. It is that feeling in the pit of your stomach of losing a loved one, observing their last rights being read via Zoom. Here I am reminded of the journalist Samira Sawlani’s personal, moving observations about exactly this situation, when she says:

“The ‘Zoom funeral’ has been among the most peculiar experiences for me. Watching the last rites being performed and swinging between gratitude for technology and utter disbelief that this last goodbye involves you sitting in front of a screen as if you are watching a film or a Netflix show. And then. It’s all over. As other people begin to logout, you stare at the ‘leave’ button, daring yourself to click it. The decision gets taken out of your hands as a notification pops up, telling you that the ‘meeting’ has ended.”

Lubisi’s work is also a reference to the aching distance that stands between you and a loved one, someone close that you have not seen in a long time, and not being able to embrace them with all the love in your heart.

Referencing the universal sense of loss and separation, Apart is also decidedly rooted in South African and African themes. She describes her work as being “a celebration of African heritage [that] embraces our diversity. I combine patterns that derive from fabrics/textiles that are associated with different cultural groups, to make them hybrids. No pattern dominates or overpowers the other (suggesting cohesion); they create shapes that are a metaphor for a new landscape that is free from its historical, political and cultural constraints.”

But there is also undoubtedly a general sense of whimsy and hopefulness to be read in these patterns, one that reflects the sense of curiosity and clumsiness of our early efforts to stay safe and make light of being locked down. The few points of connection that do appear in the work are like the brief fist and elbow bumps we now give each other, our normal, physical forms of contact greeting having been broken. The dots, lines and triangles that texture the colourful work are reminiscent of the prints that appeared on some of the first fabric masks produced in cottage industries during the first lockdown. It wasn’t just about staying safe, but also drawing on colour and patterns to get through the gloom of infection and death. Even in the spaces apart, we attempted to make light of the situation that at times was indeed life threatening.

But for Lubisi, the pandemic also raises deeper unstated differences, of class and race that are of course accentuated when the competition for resources is heightened by government restrictions that often affect black and poor folk most acutely. It is also these differences that Apart holds up, not as a hierarchy, but as a coherent set of relations, that together make us stronger. “As we slowly resume more [to] normality I’m hoping that, with our differences, we can and will be able to form stronger and cohesive relations and keep the bonds that we have formed ‘intact’.” Being apart, different, is agonising, but also a space of relation that, in future, may indeed make us whole again.