She is a Toronto-based artist, audio producer and former host of Canadaland’s arts and culture podcast The Imposter.... ->

She is a Toronto-based audio journalist, who’s produced work for networks like Crooked Media, and Canadaland.... ->

We Are Not the Virus

The start of the pandemic laid bare the state of Toronto’s housing crisis for all to see, but at the time, very few people were around to see it. Hundreds of unhoused people were leaving a shelter system teeming with outbreaks, and setting up makeshift dwellings in parks, under bridges, or in stairwells. The City of Toronto swiftly responded, issuing trespass notices that demanded that residents vacate, sometimes with less than 24 hours’ notice, or face the possibility of fines and arrest.

Outreach workers and healthcare advocates started visiting these encampments outside of their onerous work hours, to try to ensure peoples’ rights were being respected, and that they had access to basic aid. After all, the city had declared a stay-at-home order and a moratorium on evictions, yet people were being evicted from encampments and forced into transience. This was despite the CDC’s recommendation that encampments not be cleared unless individual housing was made available, in order to curb the viral spread.

The Encampment Support Network grew out of this impasse. What started as a small group of about a dozen people -– mostly out-of-work artists and musicians who began showing up to defend people against evictions – became a network of over 200 volunteers who delivered daily supplies, from tents to Gatorade and harm reduction in six of the city’s downtown neighbourhoods. 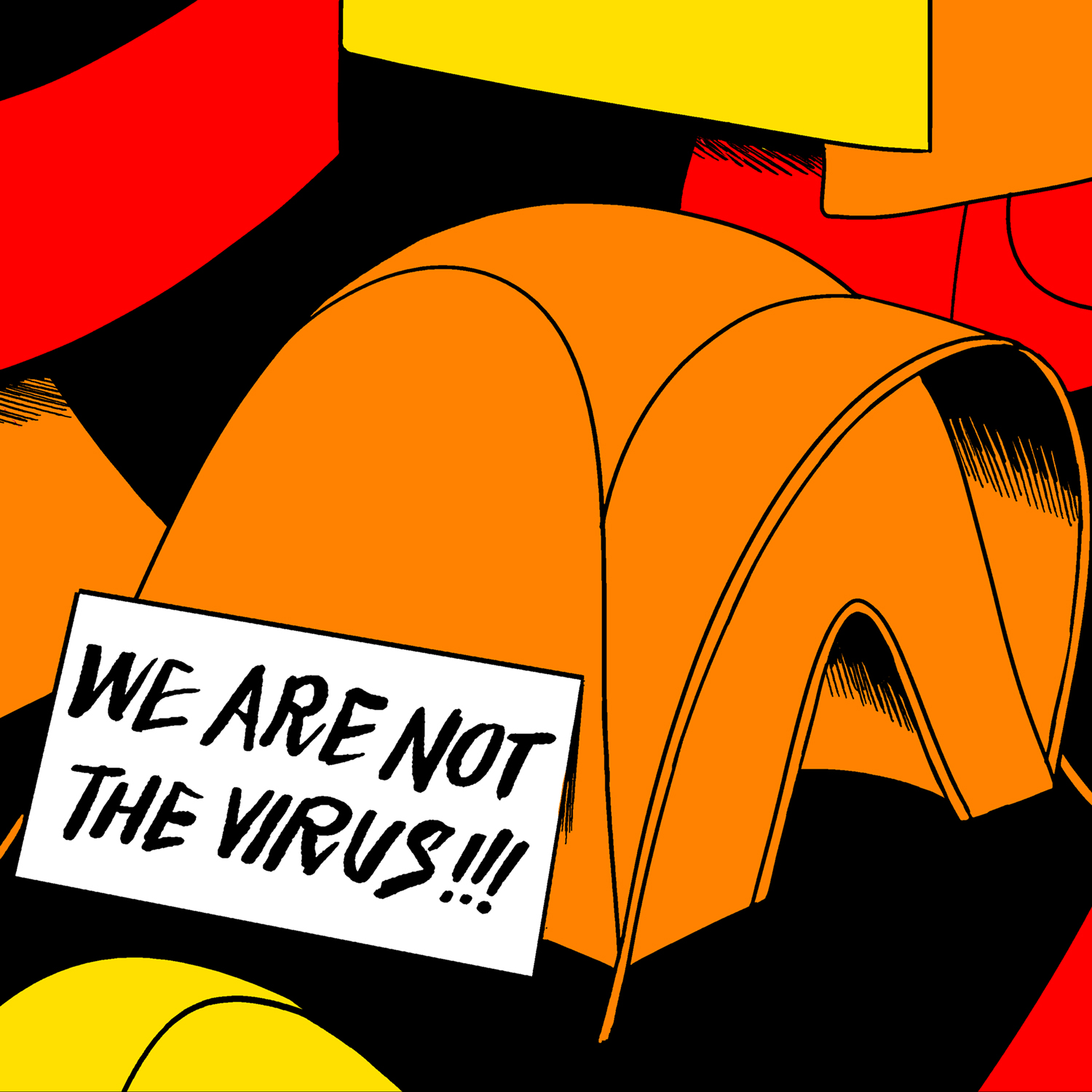 “We are not the Virus!” podcast cover illustration made by artist Michael DeForge

We Are Not the Virus is a four-part narrative podcast series that arose from the need for media that reflected the things we were seeing and hearing in encampments every day. Through the series, unhoused people expand the story of homelessness beyond the flattened, issue-based reporting of traditional media, to encompass their personal memories of place, strategies for care, and political analysis.

Audio storytelling proved an effective medium for weaving those elements into narratives that include broader systemic critique, media analysis and histories of resistance on the land, in a way that is both accessible and engrossing. Using sound as the vehicle also allowed subjects to maintain a degree of anonymity, and helped to diminish the impact that visual bias often plays in shaping audience response. One listener recently told us that the show transformed how she saw the encampments in her neighbourhood. Though a  mundane comment on its surface, it underscores the potential of sound to disrupt the social relations that arise in our visual-dominant culture.

Each episode draws on one of the four elements – earth, wind, water and fire – to frame a particular facet of encampment life. The series is ongoing and will take place over the course of a year, with each element mapping onto the conditions of a particular season. That contiguity helps listeners connect to the current lives of residents and makes the project an effective solidarity-building tool.

The first episode, Water, follows residents in Toronto’s Moss Park through two days of a heatwave as they try to find creative ways around a lack of access to water. Episode Two, Wind, looks at the effect of continual displacement on people’s health and wellbeing. We delve into the story of a tent city that came up in a parking lot on Toronto’s Lakeshore in the late 1990s in order to understand the various forces moving people around the Lakeshore today.