Dr. Camelia Dewan is a Postdoctoral Research Fellow in the Department of Social Anthropology, University of Oslo... -> 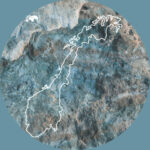 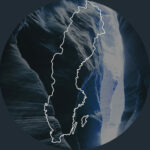 There is No Vaccine for Climate Catastrophe

What can visualising the different COVID-19 responses in Norway and Sweden tell us about collective beliefs and social norms such as the ‘law of Jante’, a complex set of social norms that promote ideals of egalitarianism, as well as discouraging going against group consensus? Or standing out from the crowd? In this essay, Camelia Dewan, a social anthropologist born and raised in Sweden, shares her personal reflections of living in Stockholm, Sweden, while working from home for the University of Oslo, Norway. The essay complicates several dominant narratives that have taken hold of the collective denial of Swedish public debate: that Sweden got more infections simply because it was more “unlucky” than its neighbours, rather than because it insisted upon treating COVID-19 as a flu, the persistent denial of herd immunity via infection being a strategy, and the denial of the emerging international consensus on asymptomatic and aerosol transmission that resulted in slow implementation of testing, tracing and isolating, with travel quarantine only introduced in January 2021. Visualising the events as they unfolded a year ago, this contribution explores the links between lived experience of the pandemic versus the official public policy narratives and the emerging scientific debates on the best response to the zoonotic virus SARS-CoV-2. 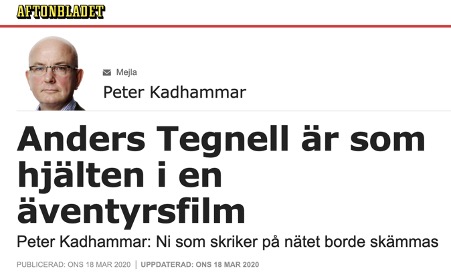 Why did Sweden move in a different direction than Norway? How can we explain the major differences in the two approaches, given their many similarities and shared histories and socio-cultural norms? In a previous essay in the Corona Times blog, social anthropologist Thomas Hylland Eriksen rightly points out that one reason for the success of the Norwegian approach was the mobilisation of the broader society to fight COVID-19, driven by the notion of dugnad, which Eriksen defines as “unpaid, collective, cooperative work where every member of a community is expected to participate, regardless of their social position”. This term, he argues, is “a symbol of egalitarianism” that highlights long-standing traditions of collective solidarity invoked by politicians to mobilise citizens towards a common goal.

Eriksen stresses that the way Norwegians have complied with the authorities highlights higher levels of trust in state institutions than elsewhere. He invokes the Law of Jante to argue that this cultural norm pushes people to show solidarity and work for the common good, rather than for their own selfish interests. Indeed, Jante is “a celebration of the ethos of equality which is fundamental to Norwegian society”.

In this analysis, one could easily replace Norwegians with Swedes. Had the Swedish public health authorities pursued the same path as Norway, it is quite likely that people would have followed stricter guidelines against COVID-19. Instead, by not adhering strictly to the recommendations, most Swedes effectively fell in line with the FoHM unofficial strategy of herd immunity – they continued with their normal activities almost as if it were business as usual, and did not contest the knowledge and authority of the FoHM. One injunction of the Law of Jante is that no one should think that they know better than the group, and in this case, one could say that this injunction was implicitly adjusted to mean that nobody should think they know better than the Swedish Public Health Agency.

This helps explain why when people like myself questioned what was going on in social media debates, we were called hobby epidemiologists and alarmists – the one that struck me the most in this sorry display of attacks and insults I experienced was the accusation that mine was a “fake account from a Russian troll factory paid to slander our superior Sweden”. Top scientists who have written public letters and a petition with 2000 signatories from Swedish academia were equally vilified and diminished. 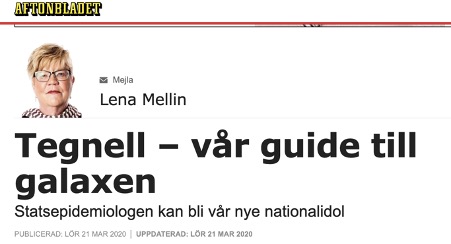 Article in Swedish daily newspaper: “Tegnell – Our Guide to the Galaxy”

Jante played a role in both Sweden and Norway, but has led to different outcomes due to the different routes taken by the respective health authorities and their governments. In Norway, korona-dugnad helped the state contain the virus, while in Sweden trust in the state and collective solidarity took a defensive form. The flawed decisions of the health authorities had to be protected from public criticism at home and abroad, and collective denial about the true extent of COVID-19 negative effects became entrenched across the board.

What other factors can account for the difference in approaches between the two countries? For one, while, until very recently, the Swedish government headed by PM Stefan Löfven fully stood by the recommendations of the FoHM, Norwegian PM Erna Solberg went further than the advice provided by the Folkehelseinstituttet (FHI), the Norwegian counterpart of the FoHM. The FHI’s advice was often different from the Norwegian Directorate of Health, and the national government resolutions often took elements from both, which encouraged a more pluralist and democratic dynamic over what counted as science and scientific evidence. In Sweden, on the other hand, there have been few, if any, checks and balances on the power and authority of state epidemiologist Anders Tegnell and his close associates at the FoHM. In the spring of 2020, Tegnell quickly became the face of the Swedish approach on national and international media. The brand of health nationalism highlighted before carried with it a personality cult of sorts, with Tegnell elevated as a national hero. He has a Facebook fan club (it used to have 80,000 followers but has now shrunk to 33,000), people got tattoos of him, and a TV programme on Swedish channel TV4 even showed how to make Christmas tree angels with his face. 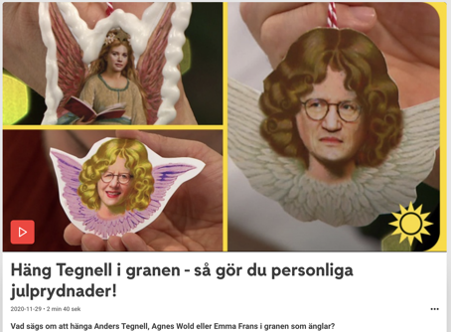 Hang Tegnell on your Christmas Tree – make personal Christmas decorations. How about hanging Anders Tegnell, Agnes Wold or Emma Frans on the tree as angels?

Perhaps aligned with the expectations of many “public health patriots”, Tegnell has cultivated the image of a distant, tough man, who keeps emotions out of his work and believes to have special access to scientific knowledge that is purportedly unavailable to those who criticised him. When asked about his lunch break by journalists interviewing him, he replied “lunch is for wimps”, referring to the iconic phrase uttered by fictional greedy financier Gordon Gekko, portrayed by Michael Douglas in the classic 1987 movie Wall Street.

When it comes to scientific expertise, Tegnell maintained his own echo chamber, in close alignment with Johan Carlson, his boss at FoHM, and their expensive consultant Johan Giesecke. The three are family friends and have worked together for decades. Several critics have pointed the finger at this “boys club”, highlighting that the expert voices of those who were not part of it have been excluded or ignored.